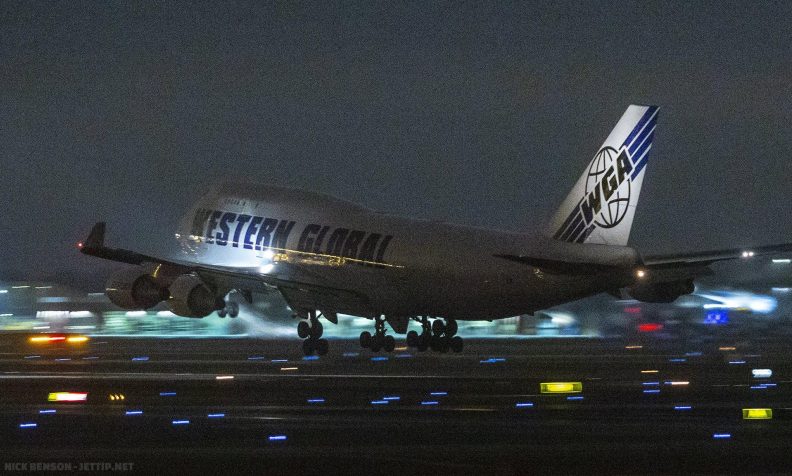 Every December, holiday shopping in the US creates a huge demand for air cargo, as gifts get sent between distribution centers, retailers, and consumers. Peak season creates some great spotting opportunities for aviation enthusiasts as well, as cargo airlines increase frequency, swap equipment, and lease capacity from other carriers - virtually every airport that sees regular mainline cargo traffic will see some unusual activity.

If you're interested in seeing some of these flights, check out our smart flight alert service - you'll get an automatic notification when unusual-to-your-airport equipment is on the way in.

Based on analysis of the smart flight alerts we've been sending to subscribers across the US, here's a look at equipment that went into service starting in late November. We'll try to keep things updated as peak continues.

Two or three 767-300s, presumably operating for UPS, most of them starting on November 26.

ABX also operates flights for DHL and Amazon, and their 767 freighters have been throwing alerts at other airports, mostly for flights to/from DHL's hub at CVG.

Amazon's US air cargo network is dominated by 767s operated by Atlas and ATI. Further analysis is needed to see if there are new routes or increased frequencies, however, based on alerts getting thrown for aircraft in Amazon's livery, they're not serving new cities as part of their peak operations. That's probably only noteworthy in that it confirms Amazon's fully utilizing their fleet, and aircraft in Amazon colors aren't getting bounced over to support Atlas or ATI's peak support for UPS or DHL.

Repeating what was seen last year, an Asia Pacific Airlines 757 has started flying west coast routes for UPS on December 9.

747-400s for UPS since November 19. Atlas flights for UPS fly with Atlas flight numbers, many are direct replacements for existing UPS routes with the same number, others appear to be new. Atlas 747-400 aircraft operating on behalf of UPS:

Looks like N360CM is this peak season's too-much-freight-to-paint aircraft to keep an eye on, with a healthy portion of its old Air Incheon livery still intact. https://t.co/Suur3Mzqxy

Another interesting freighter to keep an eye on this peak season: N409AZ. Just started flying ILN-ONT-ILN for Amazon this week, but hasn't had time to visit the paint shop yet, so it's still wearing remnants of its old Delta livery.

747-8F threw high priority alerts after stopping at SDF on December 6, and again on December 13 - looks like they're doing weekly service again this year. They've also thrown alerts at ORD and JFK this season.

FedEx aircraft have thrown alerts at many, many airports across the US as they adjust equipment assignments for peak. As mentioned elsewhere in this post, Atlas and Kalitta 744s are also being substituted on some of their long routes.

Eight Kalitta 744s went into service for UPS on December 9 or 10:

National Airlines flew for UPS in 2018's peak season, but both of their active 744Fs are currently flying military routes. Perhaps they'll join UPS in the next round?

Also worth noting, per PlaneSpotters.net, they've got three more 747 freighters and an A330-200F joining their fleet in the near future; none of them have flown recently (per FlightAware), so hopes for them participating in peak would seem slim, though.

On December 16, N919CA, one of their older 747s, did an odd hop through CVG, before going to SDF. Too early to know for sure if they're doing domestic peak work or not, but, something to monitor.

Nippon Cargo 748F JA17KZ made a stop at YWG on December 9; unsure if it'll be a recurrent peak flight.

Singapore Cargo B744 threw alerts at CVG and SEA December 15/16.

It appears that all three of SkyLease Cargo's active aircraft are in service for UPS starting December 9 or 10.

A handful of alerts have been triggered for their 747 at MIA and LAX; unsure if peak related.

In the United States, noteworthy equipment appearances for aviation enthusiasts during peak season are largely due to UPS's reliance on partners for additional capacity. The first big round of wet leased equipment started flying for UPS around November 26, and another round will be starting the week of December 9. We've heard 21 Air, Atlas, and Asia Pacific will be sending additional aircraft to UPS at that time.

As with FedEx, there have been many smart flight alerts sent for unusual UPS equipment being reallocated throughout their network.

Annoyingly, WGA flights don't usually trigger alerts until after they've arrived and departed; fortunately for enthusiasts, they seem to quickly establish an operational pattern. As in past years, they have a good number of aircraft operating out of SDF for UPS... in fact, nearly all of their operational aircraft are now flying for UPS.