As we enter the homestretch in this year's US presidential election, both campaigns are getting out and traveling more. As the campaign has progressed, tracking the aircraft used by both sides has become more difficult; of course Air Force One and Two flights have always been blocked by commercial flight trackers, unfortunately now most of the Biden fleet, including the flagship 737, are as well. Links to real-time tracking via ADS-B Exchange are provided below for all of the aircraft, which isn't helpful for future flights, but can be used to keep tabs on where they are and where they've been.

This post will be updated regularly, but you may find additional photos, videos, and updates on the JetTip Twitter thread covering these flights. Upcoming activity is now highlighted on the top of this post, though there's plenty of additional information if you keep scrolling!

None scheduled at this time. 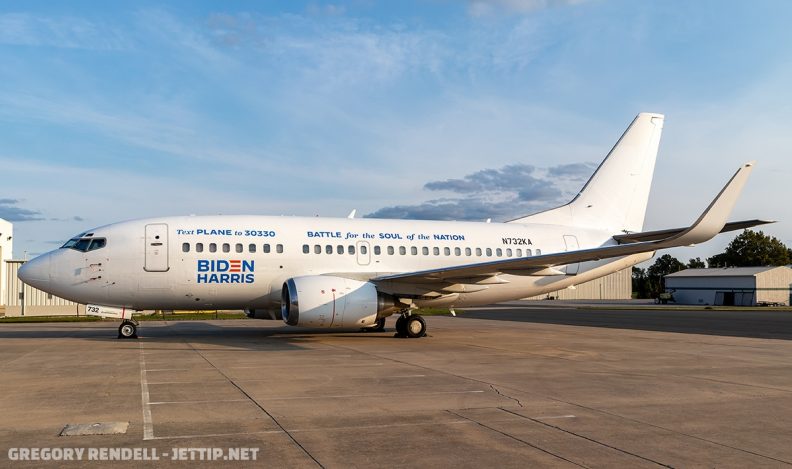 N732KA, a 737-500 operated by Kaiser Air, is the flagship aircraft for the Biden campaign. This is the third iteration of its appearance - the slogan was added over the weekend of October 3 in Ardmore, OK.

After some reporting in mid-August suggesting the Biden campaign wouldn't be flying, they've since shifted course, going through a phase with a rotating fleet of Gulfstreams, and now they currently utilizing a 737-500, N732KA, to carry Joe Biden, along with a handful of other aircraft for Harris, Jill Biden, the press, and staff.

Of note to the enthusiasts and photographers keeping tabs on these aircraft, only the flagship, N732KA, has any campaign markings or decals, the rest are generic bizjets.

Joe and Jill Biden have been flying out of New Castle (ILG) near their home in Wilmington, DE. Earlier their pool of aircraft was somewhat dynamic; as of September 25th it appears to be fairly stable.

Earlier Harris has been campaigning with different charter aircraft out of her home airport of OAK for every trip, though flight activity suggests N235DX might be sticking around with the campaign.

Several other aircraft have previously been utilized by the Biden campaign (details can be found further down on the day-by-day analysis), though a few worth highlighting are:

Joe Biden will appear at an NBC townhall in Miami, FL.

Joe and Jill Biden campaigning by rail in Ohio and Pennsylvania, starting in Cleveland, and ending in Johnstown.

The first debate is being held in Cleveland, OH. Primary airport being utilized by Biden campaign appears to be BKL; the JetTip filterable arrival/departure board there will be freely accessible today.

Joe and Jill Biden, along with Kamala Harris flew to Washington DC to pay tribute to RBG; other than Jill Biden's public event in Maine, not 100% certain on what the other aircraft are up to today.

Joe Biden will be campaigning in Charlotte, NC (CLT).

Joe Biden will participate in a CNN Townhall in Scranton in the evening:

A trio of aircraft flew ILG-TPA.

Based on social media posts, it looks like the campaign is utilizing using an ad-hoc fleet of other bizjets. 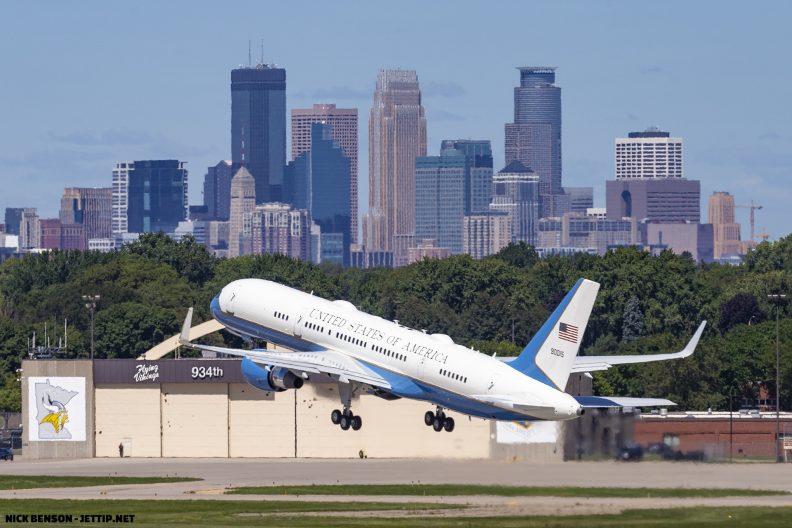 Air Force One departing Minneapolis after a quick visit from POTUS on August 17, 2020.

The incumbent has the advantage of the US Air Force providing transportation, of course. The President has been traveling aboard both the VC-25A (derived from the civilian 747-200) and the C-32 (based on the 757-200); sometimes the smaller C-32 is used because one of the airfields is too small to accommodate the larger VC-25A; sometimes the VC-25As are unavailable for schedule or maintenance considerations. It appears the campaign would not reimburse at a different rate based on the aircraft used; since 2009, regulations say the government should be reimburst an amount comparable to chartering an aircraft.

When POTUS flies, a backup aircraft will travel with them and hold nearby in-flight or land at another airport, which can provide aviation enthusiasts with an additional chance to see one of these unusual aircraft up close. Additionally, a Presidential visit will usually get two or three C-17 loads of support equipment, motorcade vehicles, and aircraft. For everyone's safety, follow instruction and posted guidance from law enforcement and security, though in my experience photography of Air Force One is permitted from public spaces. 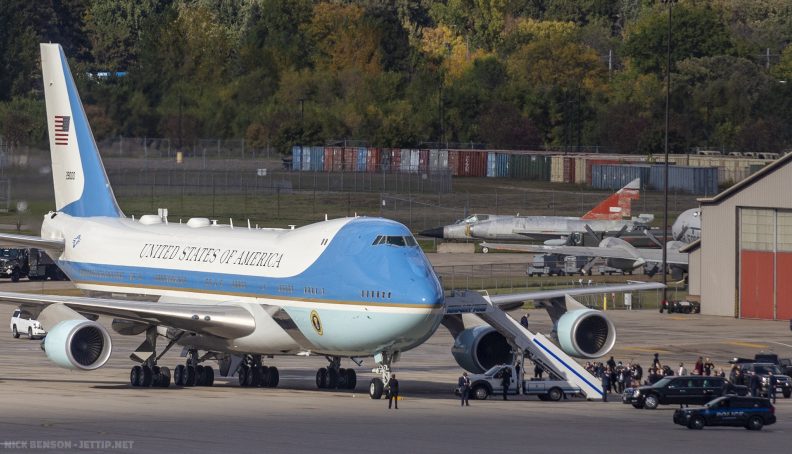 This will likely be the last election in which a sitting president will be able to utilize the VC-25A to campaign - aviation fans shouldn't take their frequent appearances in battleground states for granted!

Military aircraft, including Air Force One, are blocked from our commercial data feed, but they are trackable in real-time via ADS-B Exchange. The typical Air Force One fleet consists of a pair of VC-25As and seven C-32s.

FAA's Public Notices sometimes reveal upcoming plans of POTUS and VPOTUS before the campaign publicly announces them; it's safe to assume a "VIP movement" is referring to Trump or Pence. Once a TFR is posted, a radius of 30 miles indicates POTUS; 3 miles for VPOTUS.

For campaign surrogates who aren't required or able to travel aboard USAF aircraft, the Trump Organization fleet can hypothetically be used. Trump Aviation currently lists a 757, Citation X, and three S76s, though it appears all three of them are no longer with the organization.

As the whole world now knows, President Trump has COVID-19; in theory, all events for the next two weeks will be cancelled, and no further travel should be expected until on or after October 15. Hard to imagine there won't be some campaign events with surrogates going forward, but nothing has been announced yet.

Can confirm the FAA TFRs for Sandford on Friday, and Green Bay and Janesville on Saturday have been cancelled.