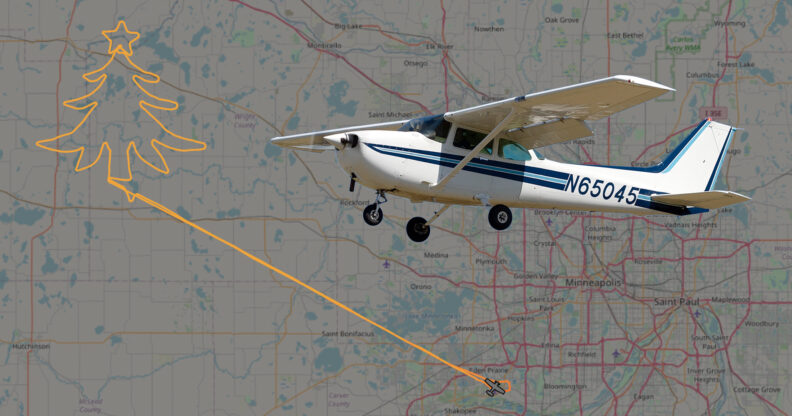 News started spreading of a pilot in the Twin Cities drawing a giant Christmas Tree in the sky on Monday. First a post on one of the local aviation Facebook groups, then getting picked up by the social media teams at flight trackers FlightRadar24 and FlightAware.

The pilot responsible for this festive feat, Paige Rudnick, was generous enough to answer a few questions about the flight.

Can you tell us a bit about your background? How long have you been flying? What sort of aircraft do you like to fly?

In 1994 my mom asked me if I wanted to learn how to fly. I thought she was making conversation when I answered, "Yes." However, the next thing I knew we were on our way to Executive Air in Green Bay to meet my new flight instructor.

For my parents, they thought learning to fly would be a way to treat my then low self esteem. They were right, and over the course of 1.5 years I earned my Private Pilot license only to stop flying with about 80 hours in my logbook when I went off to college. I’d wanted to fly for the airlines since I was in grade school but I started seeing reports of how bad the pay was at the regional airlines, which led to me getting cold feet. I ended up going into Computer Science instead.

Come 2015 I found myself inspired to fly again. After knocking the rust off at a flight school, I joined Cloud 7 Flying Club where one of the airline pilots remarked to me that, "There’s nothing like being paid to fly." His remark touched a raw nerve in me from having given up on my childhood dream. Add in the reports of the looming pilot shortage at the time, plus encouragement from my local Women in Aviation chapter Stars of the North, saw me work my through training until I became a flight instructor. Today I’m Chief Pilot for Cloud 7 on Flying Cloud Airport in Eden Prairie, and I also instruct in Stanton part time with just shy of 900 hours in my logbook.

My absolute favorite aircraft to fly has been a Super Cub on floats. That was pure fun. Then this past fall I flew to Vermont, and New York City in a Cessna 210. That adventure was memorable for many reasons including how I brought us down the Hudson River to circle the Statue of Liberty.

The Twin Cities has a big avgeek community, as in folks who like watching aircraft fly… is there a large community of general aviation pilots here? Are there organized events to participate in?

I'd call it a healthy size from how busy the airspace gets. But it’s not so large that you can get lost in the crowd. As for events I know there have been flour drops where planes fly over targets, and try to hit them with pouches of flour. There’s been poker runs where you fly to several airports to pick up playing cards toward the end of trying to build the best hand. Then there are things like the FAAST seminars where you can grow your knowledge, or hear cool stories.

What inspired you to draw the Christmas tree? Have you ever drawn anything else?

I'm in the pool of people for whom the holiday season is difficult. But this year when we got that big snow I found myself wanting to try to reconnect with happier times while I was out walking in the storm, looking at all the decorated houses. From that, I decided this year I was going to celebrate the Winter Solstice as the days getting longer again is a great reason for festivities. The question was how? Well meanwhile I have a friend who is a runner, and she was making various designs with her runs. One of the things she drew with her path was a tree which struck me as a great idea to do with a airplane.

As for other drawings, for Mother’s Day a couple of years ago I drew the word "Mom."

Your tree’s now been shared by FlightAware, FlightRadar24, and who knows how many others - did you let the cat out of the bag on this flight, or did people stumble across it on their own?

I had a hint my work had been stumbled upon by others as soon as I landed because the guy who came out to fuel my plane told me he found my drawing, "impressive." Then texts started to come in from other owners in the club until midnight.

I was still shocked I'd been picked up by FlightRadar24, and the others when I found out. I knew it could happen, but I didn’t believe it actually would! When I took off I was hoping to delight the local airplane spotters group, my friends, and my co-workers. That so many people got some happiness out of my flight meant my goal was achieved many times over. All that delight has grown my own which has been wonderful.

I read you took an SVG vector graphic of a tree, scaled/transformed to lat/lon, plugged it in, and followed the course. Are there any utilities or how-tos out there to help other aspiring pilots who may not have the technical background to unpack all of that?

There might be something more user friendly. I don’t really know. I saw building out what I did to enable the flight as a bonus challenge for myself. But when I drew "Mom" I did that by pushing around waypoints in ForeFlight, the flight planning app I use. So additional tools aren’t necessary to plan drawing something. The only thing required is enough determination to come up with the plan.

Anything else you’d like to share? Any good local events or programs that people ought to know about?

I show one of the club’s airplanes to promote General Aviation when Stars of the North holds Girls in Aviation Day each fall. A few years ago a woman put her two girls in my plane on display, and told them, “You’re going to learn to fly because it’ll be good for you!” I don’t know if she knew how right she was.

So the main events, and programs that come to mind are those offered by flight schools that’ll get ya trained up to be a pilot. We’ve started talking about holding a Ground School in Stanton come late February. Beyond that I recommend enjoying the journey. From the cost, to getting stuck on something during your flight training there’s plenty of things that can be intimidating around learning to fly. But keeping focused on what you’ve done, and what needs to happen on your next flight makes the process more manageable. It might not be a fast way, but it’s a way to get to be Pilot in Command.