The COVID-19 pandemic has been been devastating to the aviation; as demand softens, airlines have reduced service, and more and more employees in the aviation sector are being laid off, furloughed, or having their hours reduced. I sincerely hope that as soon as it's safe to travel again the industry makes a quick recovery, and I appreciate the effort and risk being made by employees who are working diligently to serve the aircraft that are flying.

TSA's screening volume for April 5 was down 95% year over year; will be interesting to see if this will decrease any further - it's been down 95% for several days now.

A few recent articles on the downturn worth your time: 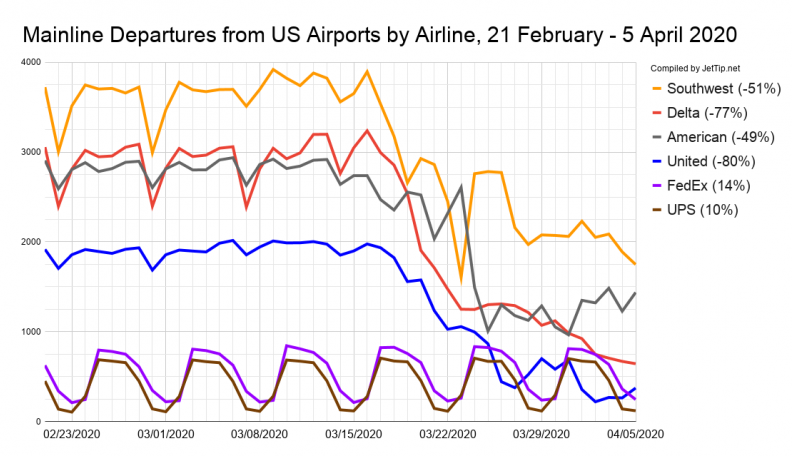 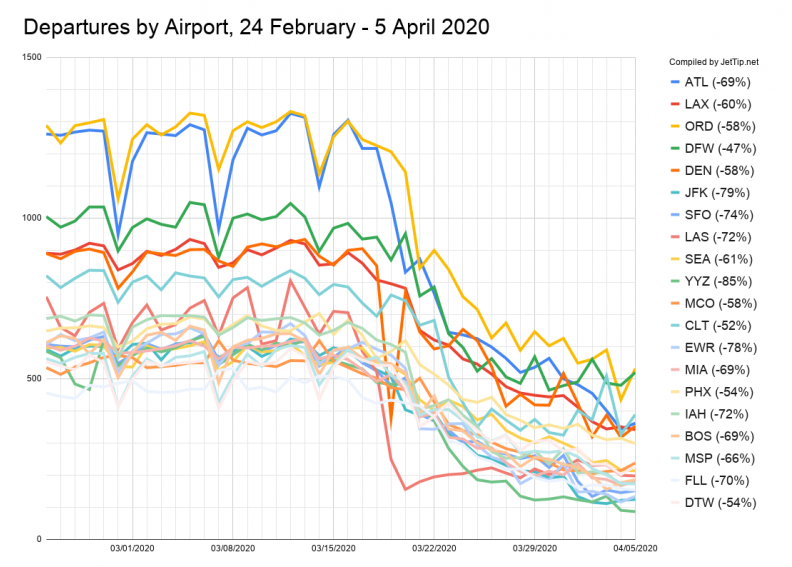 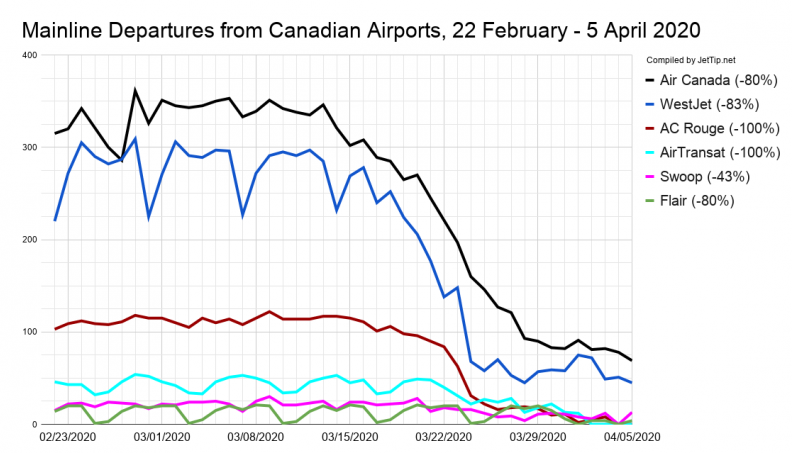 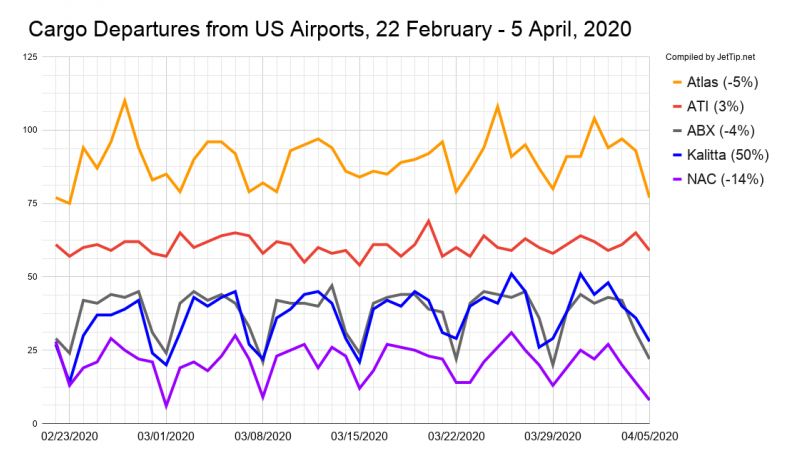 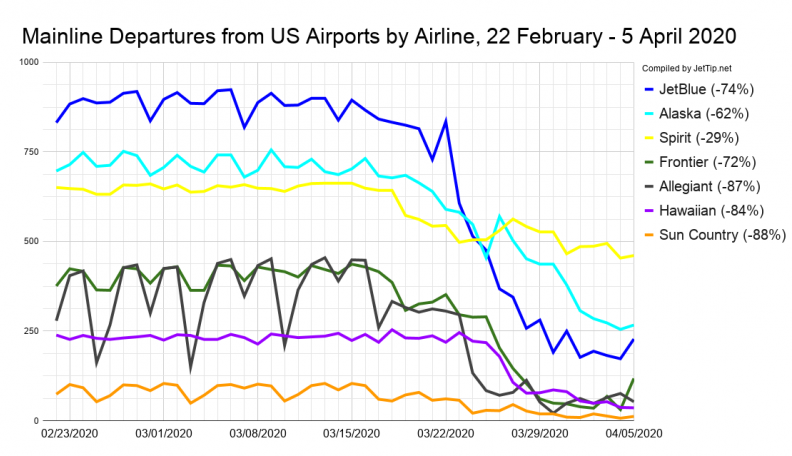 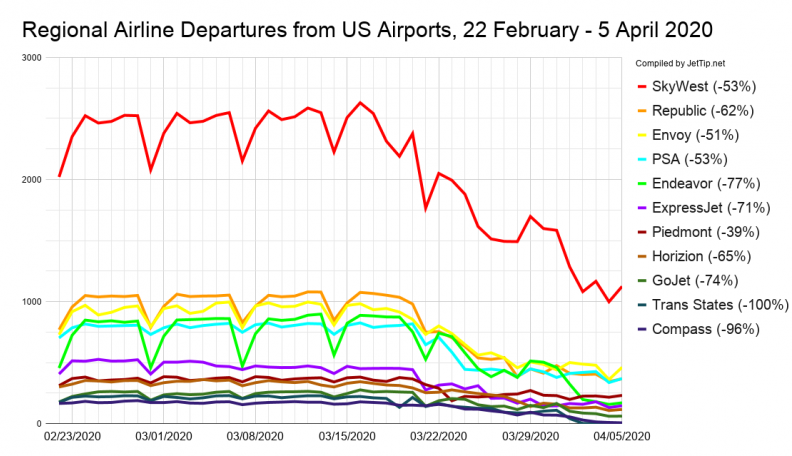 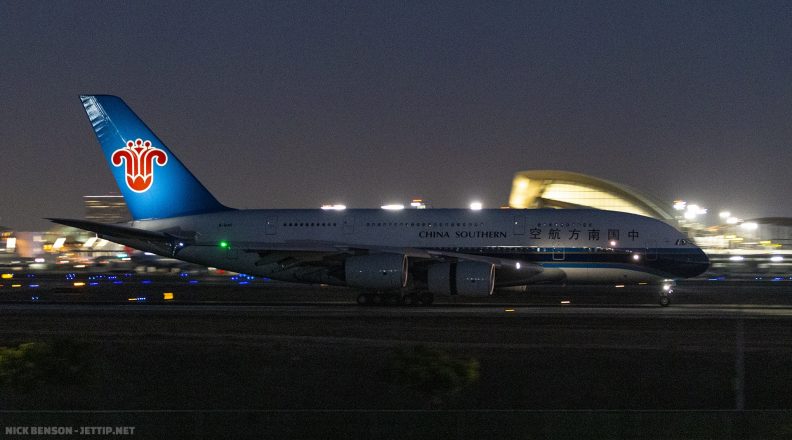 Passenger Quadjets in the US and Canada

There were stories coming out about the eventual demise of the 747, A340, and A380 before the COVID-19 crisis hit the airlines; the huge drop in passenger demand certainly hasn't helped.

Based on a review of JetTip's flight data, I believe 29 March 2020 was the first day since regular daily A380 service was established in North America that one didn't serve the US or Canada. China Southern's flight from LAX departed at 11:57 PM local on 28 March. There was not another A380 to North America until China Southern returned on 1 April and departed on the second.

Passenger 747s have been operating daily in the US since the crisis began but only by a hair. Lufthansa's flight to ORD, British Airways to DFW have been operating (BA is apparently flying cargo only, and may not be continuing); otherwise charter operators have been maintaining the Queen's reign - Wamos sent a pair Miami earlier this week, and Atlas has been flying a handful of apparent military charters.

So... we haven't yet had a day free of passenger quadjets as a result of this crisis here, but it sure seems like that day could happen soon.

So, here are some graphs and an airline by airline breakdown in the decrease in traffic from US and Canadian airlines over the last month. The methodology here is to count all flights between 12:00:00 AM and 11:59:59 PM eastern time that departed from an airport in the airline's respective home country (Delta departures from US airports, WestJet departures from Canadian airports, etc.). Since commercial airline schedules are highly cyclical, the percent change is derived by comparing the specified day's count compared to the average of the number of flights each airline operated during three previous "pre-crisis" weeks, 22 February - 13 March.