Here's the latest chart comparing aircraft traffic at major US and Canadian airports before and after the COVID-19 crisis. These stats include virtually all commercial passenger and cargo aircraft, but excludes most military traffic and general aviation where the operators have opted out of public tracking.

Air traffic at Memphis was down 16%, which is relatively strong compared to the losses suffered at passenger-focused airports. FedEx is the largest cargo airline in the world, and the SuperPort at Memphis is their main hub. FedEx traffic has been growing modestly since the crisis began.

Similarly, UPS has been experiencing some growth in the number of flights operated, which has bumped their Louisville hub into the ten busiest airports in the US and Canada. Overall traffic at SDF was down 22%.

Amazingly, Anchorage has actually seen an increase in the number of flights being operated there, the only airport in the top 50 to have done so. Many freighters flying between Asia and North America stop in ANC for fuel and crews. 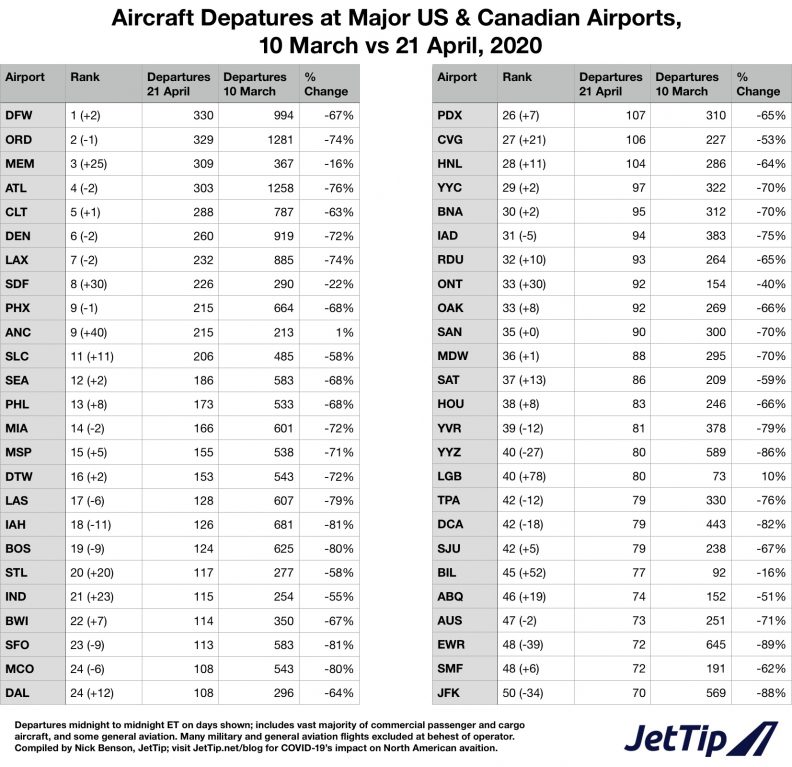 Air traffic across the US and Canada still hasn't bottomed out; Air Canada, American, GoJet, SkyWest, Mesa hit new post-crisis lows, as did IAH, JFK and SFO. Mainline US and Canada airline traffic is down 76%.

The most interesting story being told by the stats continues to be the relatively slow response of Southwest, though they're starting to catch up to the other big carriers.

FedEx and UPS are also doing very well, up 9% and 12% respectively compared to pre-crisis Tuesdays, which is a pretty strong performance on what is traditionally their busiest day of the week. 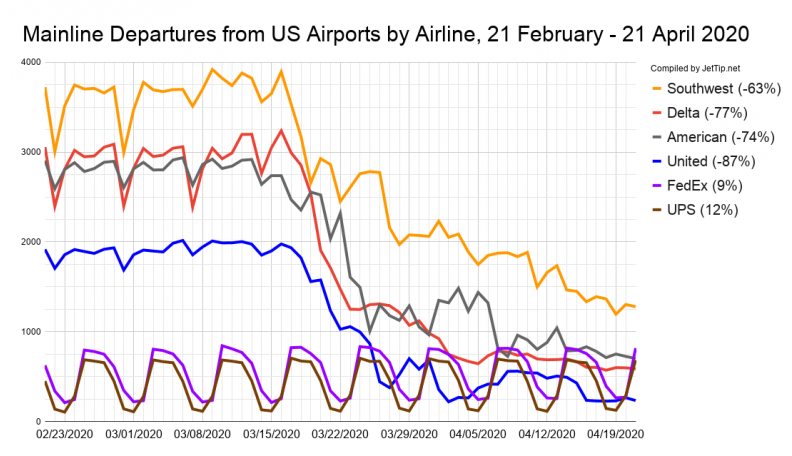 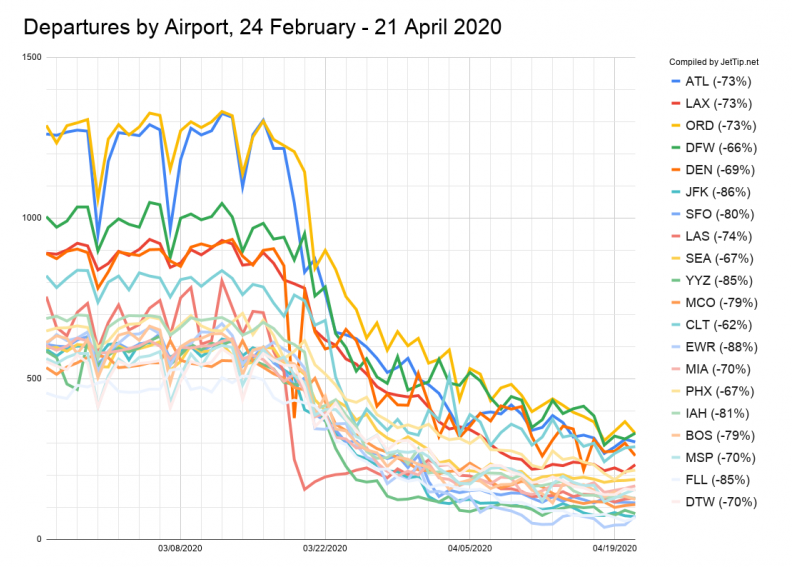 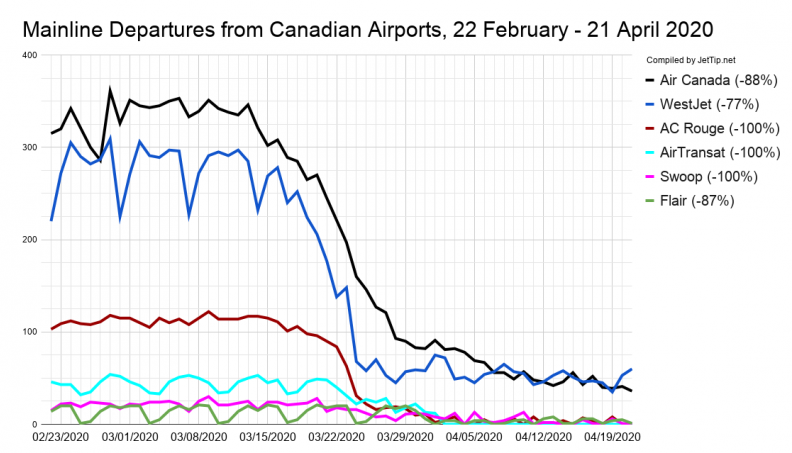 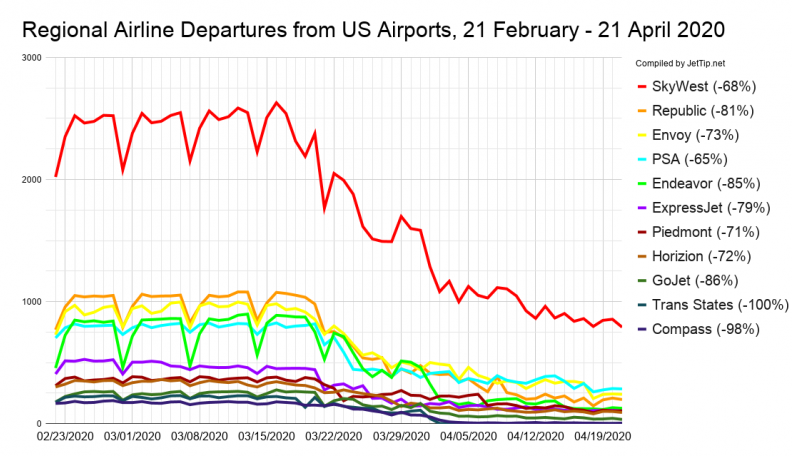 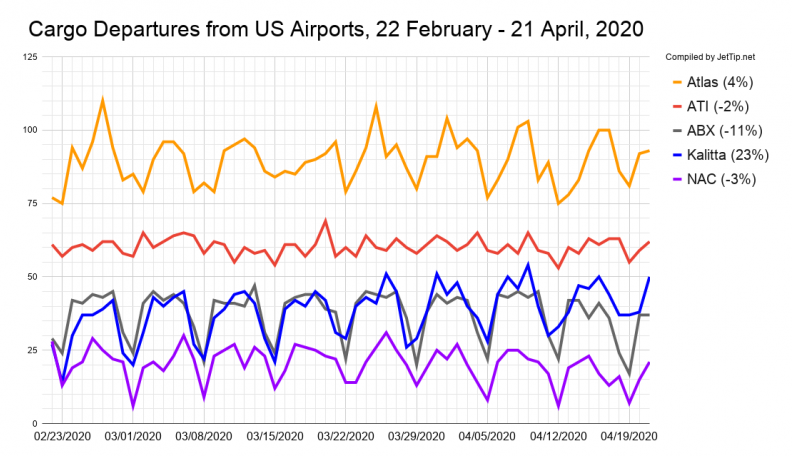 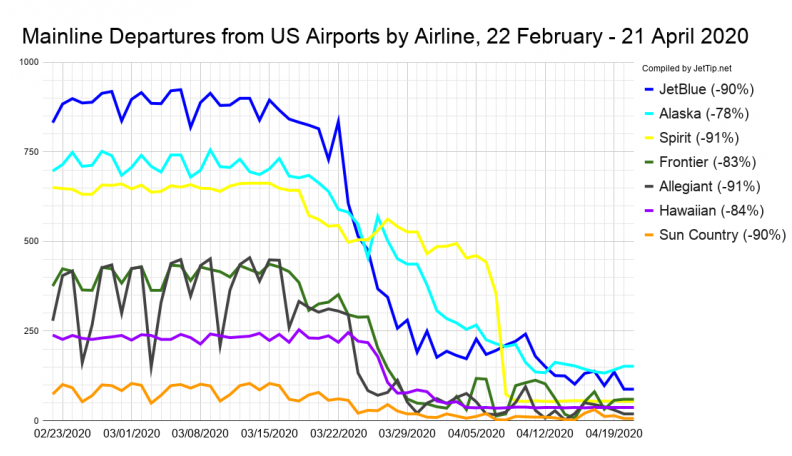 The methodology here is to count all flights between 12:00:00 AM and 11:59:59 PM eastern time that departed from an airport in the airline's respective home country (Delta departures from US airports, WestJet departures from Canadian airports, etc.). Since commercial airline schedules are highly cyclical, the percent change is derived by comparing the specified day's count compared to the average of the number of flights each airline operated during three previous "pre-crisis" weeks, 22 February - 13 March.