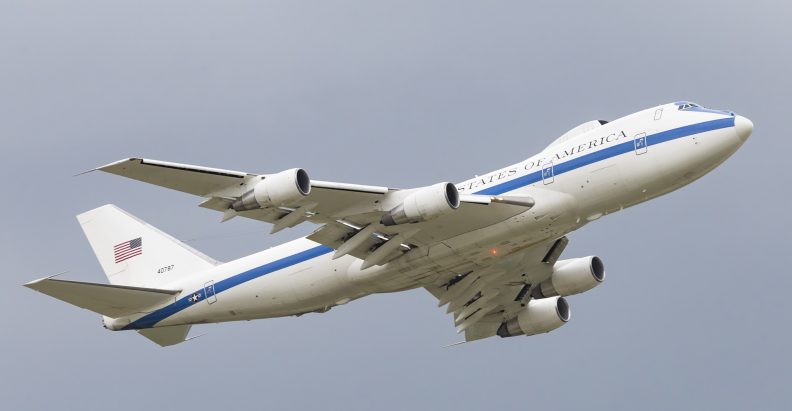 A Boeing E-4B Nightwatch, derived from the civilian 747-200, doing a touch and go at LNK. All four of these aircraft will be operating out of Lincoln through the fall of 2022.

If you're looking for a fun avgeek travel destination, Lincoln, Nebraska should be on the top of your list. Plane watching at LNK is inexpensive, well-tolerated, and for the next year or so, sports some of the best airliner spotting on the planet.

For being a smaller Midwestern college town airport, LNK normally punches above its weight for aviation enthusiasts. The field is home of the 155th Air Refueling Wing of the Nebraska Air National Guard, which flies KC-135Rs, as well as Duncan Aviation, whose headquarters and facilities bring a steady stream of interesting business jets. 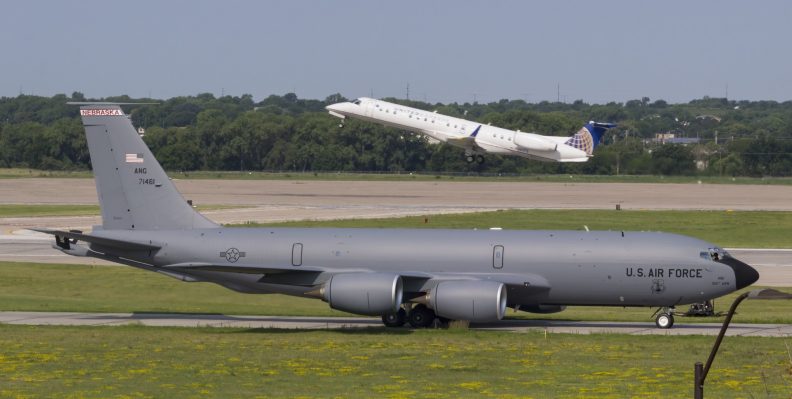 A typical scene at LNK, with a regional jet and a Nebraska ANG KC-135R tanker.

Furthermore, the airport encourages watching aircraft from the top of its four-level parking facility, which has good views of most of the field, including the main runways and USAF / ANG flight lines. Parking rates are reasonable ($9.50 / day maximum), and pre-security food and restrooms are easily accessible (this may change a bit as major renovations are set to begin soon). My family was able to hang out and enjoy the show here for three days, and while we were checked on by airport staff and police on a handful of occasions, we were not discouraged from being there.

What really makes LNK special for the next year or so is that it's the temporary home of the aircraft based at Offutt Air Force Base, whose runway is being replaced, through the fall of 2022.

Sadly JetTip's arrival/departure boards and smart flight alerts don't catch this military activity, so flight times and schedules are always a bit of a gamble, but from the research I did before our trip, it seems mid-week, Tuesday-Thursday, offers the best bet of catching a variety of military quadjets, when a handful can be expected to fly on training missions, and one or two will spend a considerable amount of time doing touch and goes.

One of the four USAF E-4B Nightwatch aircraft, arriving in beautiful morning light.

The E4-B Nightwatch is derived from the civilian 747-200, and is perhaps the most interesting airliner-derived types being flown by the US Air Force. In the event of a catastrophe incapacitating the Pentagon, White House, or other important infrastructure in Washington DC, these "doomsday planes" can take to the sky and preserve the chain of command.

There are four in the inventory, though we never saw more than two on the ground at one time when we were visiting. It isn't uncommon for them to do touch-and-goes here for extended periods of time.

The most numerous of the Offutt-based aircraft operating out of Lincoln now are the RC-135 variants, and of those the most common are the RC-135W and RC-135V Rivet Joint, which are used to monitor radio communications. There are 17 of these aircraft in the USAF inventory.

The C-135 platform, which Boeing referred to internally as the Model 717, was a derivative Boeing 367-80. So, while a close cousin of the 707 (which was also derived from the Dash 80), the frequent assertion that C-135s are 707s is incorrect... to confuse matters further, the most of RC-135 variants are referred to as Model 739 at Boeing.

Trivial minutia aside, spotters can quickly distinguish these RC-135 aircraft from the four engine setup and white/gray liveries. 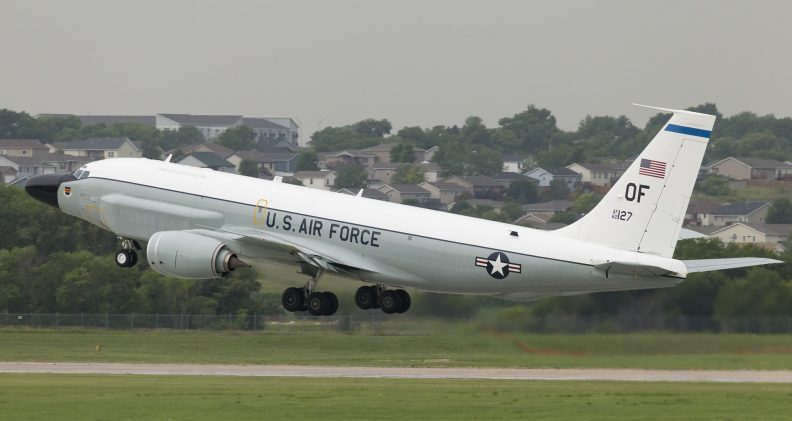 62-0127, a TC-135W, which is primarily used for training RC-135 Rivet Joint crews. There are two TC-135Ws; spotting features are the larger nose, cheek bulges, and lack of antennas/lumps/bumps of the Rivet Joints. 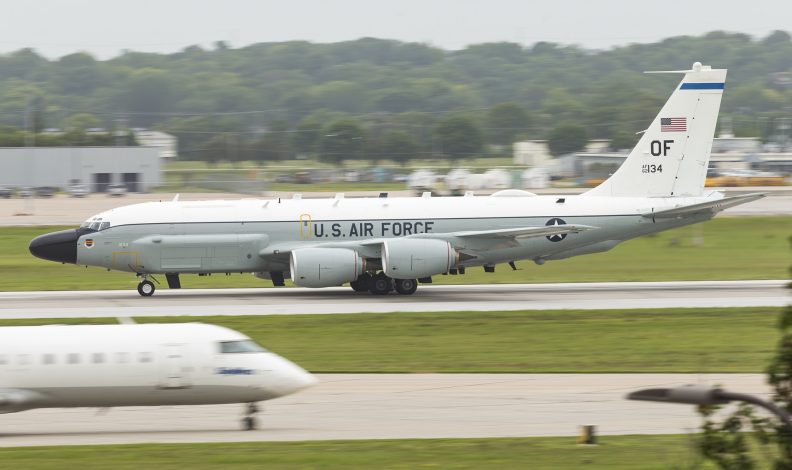 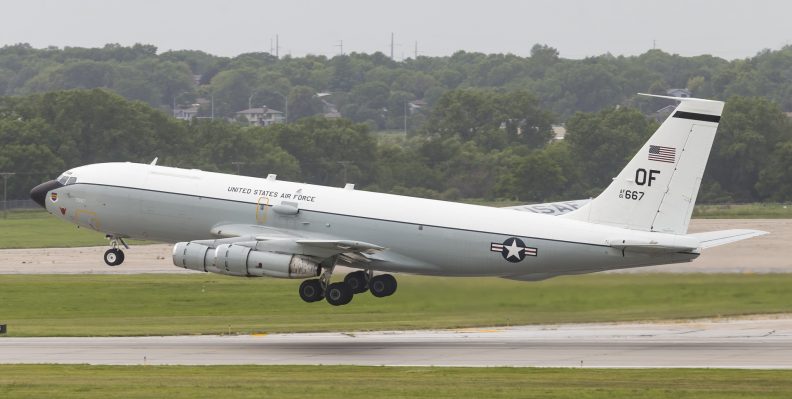 61-2667, the sole operational WC-135W Constant Phoenix is a "nuke sniffer," whose role is to sample and analyze the air for traces radioactive material. It will soon be replaced by a trio of new WC-135R aircraft, which are in the process of being converted from KC-135R tankers.

Easily identifiable by spotters as it's the only Offutt-based aircraft with the smaller, older engines.

64-14849 is an RC-135U Combat Sent, whose job is to collect data on radar systems. There are two RC-135Us. Spotting features are the shark mouth, wingtip sensors, and the large protrusion at the rear of the fuselage.

The RC-135S Cobra Ball, which we didn't catch at LNK, but had seen earlier in this photo at MSP, is another distinctive member of the Offut-based fleet. There are three of these aircraft, designed to monitor ballistic missile tests, in the USAF inventory. Their right wing and engine cowlings are painted matte-black, a callback to the glare-reduction efforts required by previous versions of their sensor suite. 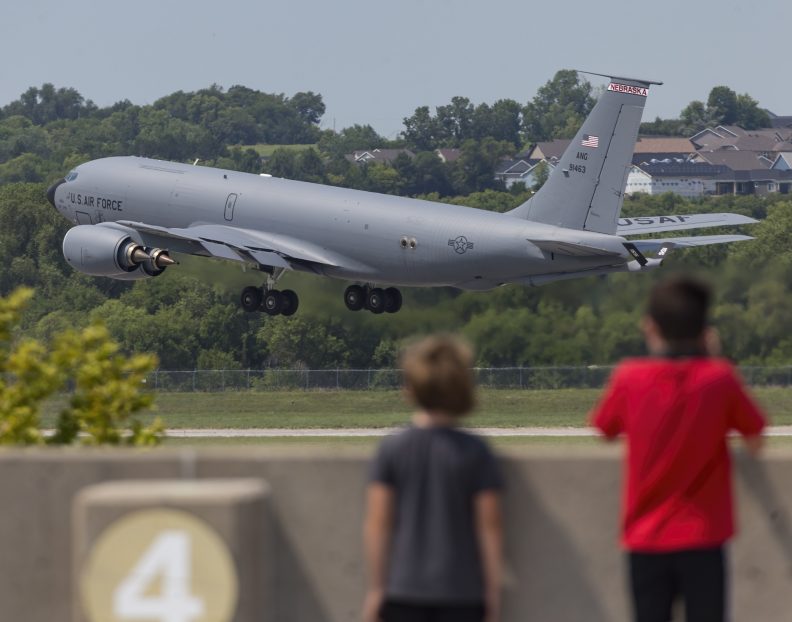 Some young aviation geeks enjoy the departure of a Nebraska ANG KC-135R from level 4 of LNK's parking garage.

As mentioned earlier, there's a unit permanently based at LNK that operates the KC-135R Stratotanker. The flightline is readily visible from the parking garage at LNK, and several flights per day seems to be the norm. 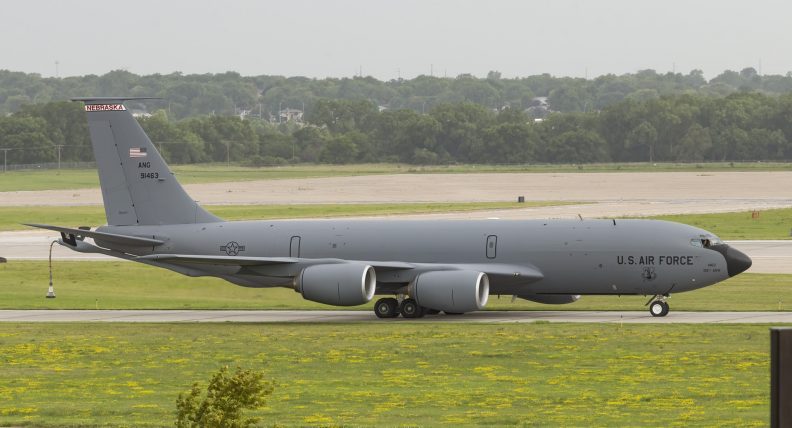 A KC-135R Stratotanker preparing to depart LNK. Sharp-eyed enthusiasts will note the shuttlecock drogue attached to the boom, which is used when the aircraft receiving fuel are equipped with a probe-based system (as in, Navy, Marine, or Coast Guard). 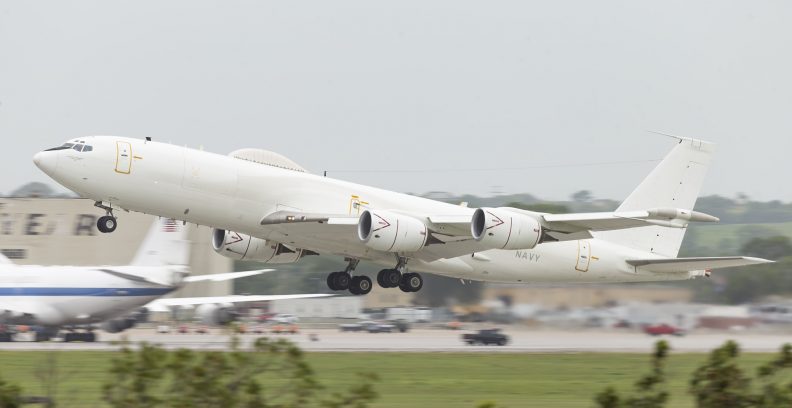 While not based at LNK, the Navy's E-6B Mercury, which were the last 707 aircraft produced, are frequent visitors. These aircraft, distinguished by their flash white livery, are designed to relay the commands to submarines, and can fulfill a similar command and control role as the E-4B, one of which can be seen in the background. 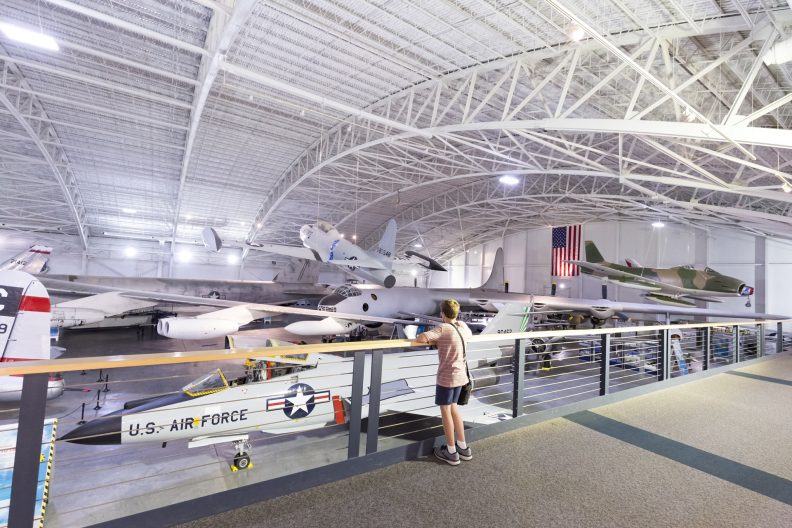 Taking in the history at the SAC museum.

While not in Lincoln, the Strategic Air Command & Aerospace Museum is a short 30 minute drive from LNK. They have an amazing collection of aircraft, especially bombers, on display in two large halls. My favorites were the B-1A Lancer, B-36J Peacemaker, B-57E Intruder, and B-58A Hustler. Sadly the Avro Vulcan is not on display, and could only be seen if one were to accidentally get turned-around and drive around to the rear of the facility while attempting to exit. 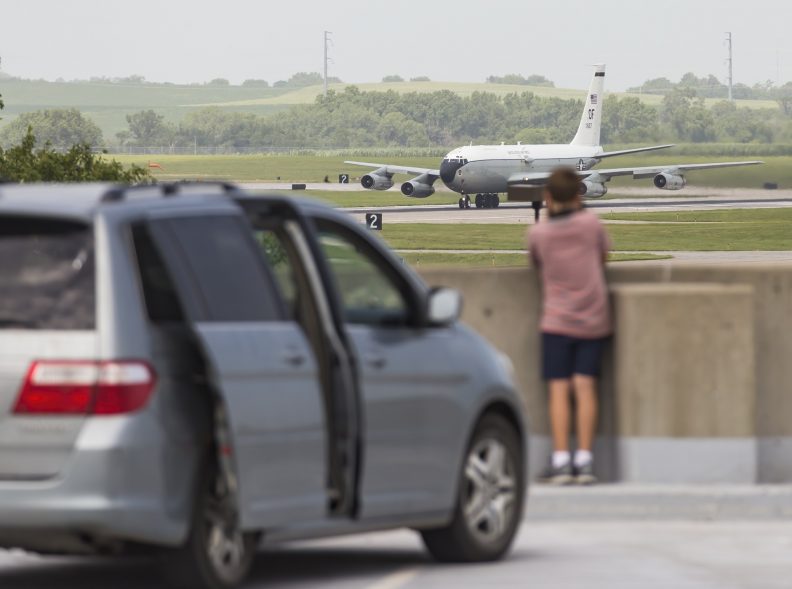 LNK's parking garage is well-suited to plane spotting with the whole family.

In conclusion, you really ought to consider a trip to LNK in the near future. United Express has flights from ORD and DEN, Delta Connection from ORD and MSP, and Lincoln is within reasonable roadtrip distance from a healthy portion of the Midwest. If in need of other distractions, the Omaha Zoo, about an hour away, is another world-class destination. 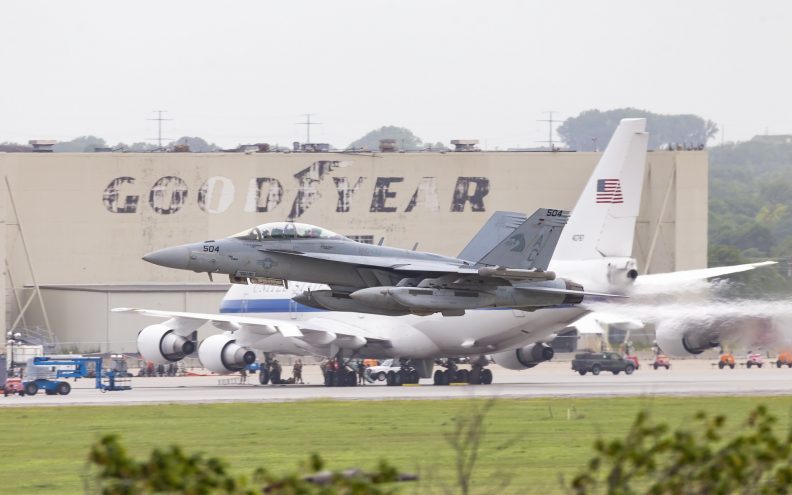 A pleasant and unexpected surprise during our visit consisted of five EA-18G Growlers from VAQ-130, which spent the night and departed the next morning. We were there for the heavies, but sure didn't mind catching some afterburners!