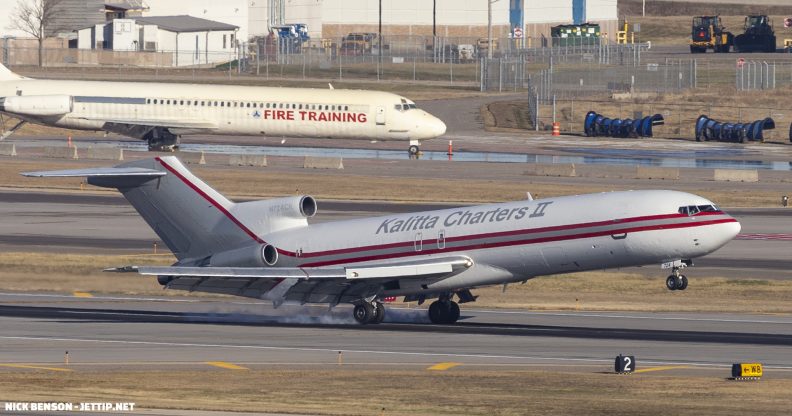 One of Kallita Charter II's 727s arriving at MSP, operating for DHL, on November 3.

Every December, holiday shopping in the US creates a huge surge in demand for express shipping, so much so that this time of year is called "peak" in the industry. Most airports that see mainline cargo flights from DHL, FedEx, or UPS will see changes in the operational pattern - aircraft that would usually linger the whole day might do a pair of flights instead; a route might be served by a larger aircraft; a route might get operated by a wet-lease partner (another airline operating a route on behalf of the usual carrier - which is listed on an airline-by-airline basis below).

The impact at each and every airport is too much to cover in a blog post, however, if you're interested in getting a heads up when unusual freighters are heading to your home airport(s), JetTip's smart flight alerts are designed for situations like this, and the cargo filter our arrival/departure boards will help give you a clear picture of operations at your field.

Just as JetTip tracked peak cargo in 2019 and 2018, we'll be doing the same again this year; if you've got a scoop (especially with respect to wet-lease operations), shoot an email to hello@jettip.net, or a DM on Instagram or Twitter, thank you! If you're interested in some good commentary and coverage from the enthusiast community, there's a great thread on Airliners.net. 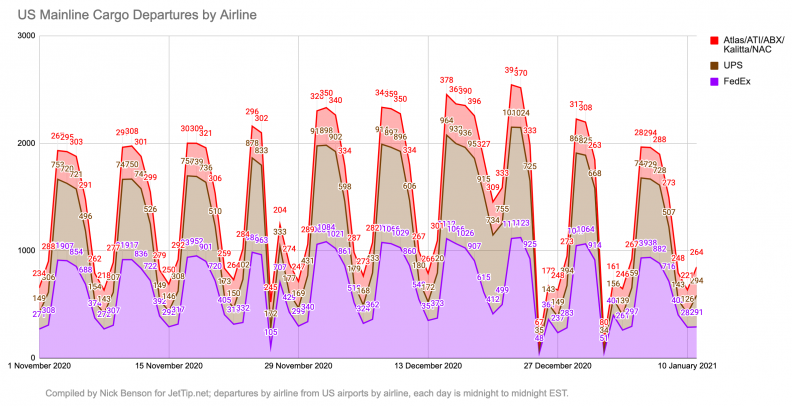 Didn't respond to request for comment. Appears their two 767s are operating, as they have been for some time, on CargoJet routes CVG-MCO and CVG-YMX.

Didn't respond to request for comment. Appears to be flying a pair of 767s for UPS.

Noteworthy: N742AX, which is in fresh Astral paint, appears as if it will be flying for ABX this peak. First flight Dec 4 CVG-MIA.

Approved by DOT at the end of November to operate 14 flights through Cincinnati for DHL, routing is Shanghai or Hong Kong to Cincinnati to Brussels or Leipzig.

Amazon's US air cargo network is dominated by 767s operated by Atlas and ATI, as well as 737s operated by Southern Air, Sun Country, Further analysis is needed to see if there are new routes or increased frequencies, however, based on alerts getting thrown for aircraft in Amazon's livery, they're not serving new cities as part of their peak operations.

Didn't respond to request for comment. A few flights operating on behalf of FedEx and UPS this year though:

Didn't respond to request for comment. Can confirm rumors that they're set to fly an ONT-PDX-BFI circuit for UPS December 15 - December 24. N888LT arrived at ONT from HNL on Dec 14.

Didn't respond to request for comment. Historically they lease a large number of 747-400s to UPS and FedEx in a couple of rounds starting in early December, adding a few more mid-month. Based on a review of activity from their fleet, it appears the following aircraft are in charter service now. Atlas flights for FedEx fly with FedEx flight numbers; Atlas flights for UPS flight with Atlas flight numbers.

ATI notably has a pair of recently converted former American Airlines 767s with remnants of the old liveries on their rudders, both of which are in peak service this year:

Didn't respond to request for comment. Their 757s and 767s have been throwing more alerts than usual lately in Canada at YOW, YQM, YYT, and YWG.

Note: a previous version of this post mentioned CargoJet flights between SDF and MCO/PHL, which was a result of N392AN being miss-labeled as CargoJet instead of ATI in JetTip's internal fleet database; it has since been corrected.

DHL relies on a variety of carriers to fly for them throughout the year, so picking up new routes / equipment upgrades is difficult compared to others; that said, Kalitta Charters II and AirBridge Cargo are providing some additional lift to them this peak.

Didn't respond to request for comment. So far this year they're wet-leasing aircraft from Amerijet, Etihad Cargo, and Western Global.

Didn't respond to request for comment. Last year they had aircraft flying for FedEx, USPS, and UPS. Based on analysis of their fleet this year; looks like seven at UPS, and four or five USPS.

A newcomer to the charter freight market, just in time for 2020's peak season, this Bermuda-based carrier has a pair of 747-400s that recently entered service. One of them, VQ-BWT, started flying SDF-HKG-ICN-ANC on November 22.

Perhaps the most interesting avgeek cargo aircraft operating in the US now is DC-8 OB-2059-P, operated by Peru's Skybus Jet Cargo out of MIA, possibly on behalf of Amerijet. It isn't getting picked up reliably through the commercial flight trackers (JetTip included), but you can keep tabs on it via ADS-B Exchange.

A spokesperson for the Postal Service didn't anticipate any visible impacts to customers due to COVID-19, and couldn't share the number of aircraft they'd be leasing, but did reveal air capacity would be increased 10-16% year over year depending on the week in December.

Didn't respond to request for comment. Analysis of fleet activity doesn't show anything unusual yet for the 747s, though seven MD-11s are operating for UPS, and two-four have been working for FedEx - two of them since October!

MD-11s for UPS from late November

MD-11s for UPS from mid-December