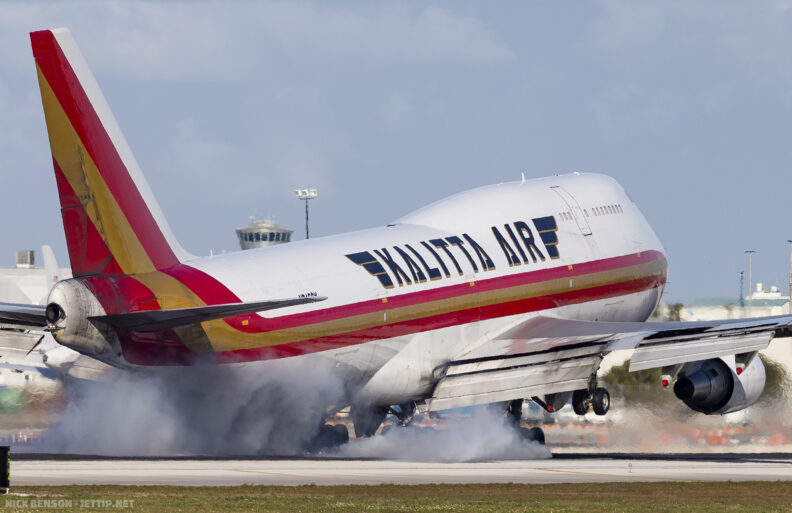 Every December, holiday shopping in the US creates a huge surge in demand for express shipping, so much so that this time of year is called "peak" in the industry. Most airports that see mainline cargo flights from DHL, FedEx, or UPS will see changes in the operational pattern - aircraft that would usually linger the whole day might do a pair of flights instead; a route might be served by a larger aircraft; a route might get operated by a wet-lease partner (another airline operating a route on behalf of the usual carrier - which is listed on an airline-by-airline basis below).

The impact at each and every airport is too much to cover in a blog post, however, if you're interested in getting a heads up when unusual freighters are heading to your home airport(s), JetTip's new smart flight alert app is designed for situations like this, and the cargo filter our arrival/departure boards will help give you a clear picture of operations at your field.

Just as we tracked peak cargo in 2020, 2019 and 2018, we'll be doing the same again this year; if you've got a scoop (especially with respect to wet-lease operations), shoot an email to hello@jettip.net, or a DM on Instagram or Twitter, thank you!

Didn't respond to a request for comment; nothing in their fleet has thrown smart flight alerts recently.

Didn't respond to a request for comment. Several 767s are on new routes this peak season.

An Alaska spokesperson says that there's a large increase in belly cargo demand during peak season, but it doesn't result in any apparent operational changes (upgauging aircraft, etc.). Volumes have been more difficult to predict with the strain on the supply chain at west coast ports. They will supplement cargo lift with passenger aircraft operating cargo-only as needed.

Amazon responded to our request with this link, which offers little for avgeeks beyond mention of the 85 aircraft now in their fleet.

The most interesting bit of recent trivia with respect to Amazon's air operations here in the US was the recent (November 9) start of ATR 72-500F service, operated by Silver, between Ft. Worth (AFW) and DSM / ABQ.

Didn't respond to a request for comment. Looks like a few of their aircraft have been on random DHL route upgauges, but not on anything consistent.

Didn't respond to a request for comment. As has been tradition for the last few years, a single Asia Pacific 757 is doing west coast flying for UPS.

Didn't respond to a request for comment. Historically a large provider of 747s for wet-lease peak lift, only two of them throwing smart flight alerts so far this season.

Didn't respond to a request for comment. Virgin Atlantic and Hi Fly Malta are both sending A330s to CVG, apparently for DHL. Quite a few regular routes seeing upgauged equipment.

It looks like a pair of IFL 727s started flying for UPS on November 29.

Kalitta's 747 fleet is a favorite of peak season spotters, of course, and fortunately they appear to be operating several domestic peak routes this year.

National did not respond to a request for comment. Their bold livery is a favorite of spotters this time of year, with their 747s frequently appearing on behalf of UPS.

UPS says it's important to note that the constraints in the supply chain this year are upstream from their network, "UPS continues to deliver on time once we have a customer’s package in hand." They also confirmed leased aircraft and equipment shifts that have been the norm in previous years will be happening again this year.

A Postal Service spokesperson indicated there would be more flights this year vs. 2020, especially to non-contiguous U.S. locations, and said air capacity compared to last year would increase approximately 12%. They're also leasing an additional 7.5 million square feet of space and adding 40,000 seasonal hires.

Analysis of flight data shows a few Kalitta 747s flying on behalf of the Post Office so far this year.

Western Global's 747s and MD-11s have been a peak season favorite for several years; smart flight alerts in the last couple of weeks only showing for a couple of WGA, and only one is a recent addition to the UPS network, sadly.